Bridges and tunnels for streets and tracks are defined with config files too.

A bridge configuration files specifies a set of parameters to define the properties, dimension, features, and visuals of tracks. They are stored in .lua files in the folder res/config/bridge/. The file has the following format:

The bridge properties start with the common metadata properties:

Their meaning is as follows:

There are several properties available to control the pillars:

Another property is noParallelStripSubdivision. If it is set to true, the updateFn will be called for the whole bridge instead of seperate segements. This might be relevant for bridges with large gaps between pillars. If set to false or the property is unset, the updateFn will be called several times. Be aware that bridge segments are limited to a length of 100 meters. Larger pillar distances then will result in no pillars.

The list is used to overwrite materials defined in the street configuration. See there for further details on the purposes of the different types.

The updateFn function is used to construct the bridge model from individual parts. It receives a params table that contains a list of properties which are provided with the function call:

The collision types are:

It is expected that the result contains two lists:

In scripts/bridgeutil.lua a prefabricated function is offered, which is also used by the vanilla bridges. This function gets a config table as parameter. The contents of this table are described below.

Bridge pillars consist of three mandatory layers, of which the middle layer can be repeated several times:

An additional pillarMain layer list can be added that is used on top of the pillarTop layer and above the track or street bed.

All four lists may vary in length. Possible lengths are:

If you do not want to use the pattern described above to assemble the pillars, but instead assemble another pillar based on the height of the pillar, you can specify a separate function for this:

The modelData is the list of all loaded bridge element models (not only from the current bridge) that is retrieved from the updateFn parameter state. For each model, the bounding box information is provided:

Due to the game loading and extracting all these bounding box data, it is required that all bridge related mdl files are located under res/models/model/bridge/!

The params parameter receives the forwarded content of the updateFn parameters. 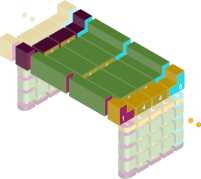 The bridge railing also consists of several rows that are placed next to each other:

All three lists may vary in length. There can be either 5 or 8 models in the list. If only 5 elements are included, the elements 1-3 are used as a substitute for 6-8 in a rotated version. The purpose of the elements are:

Be aware that the boundingbox of the three last models needs to be rotated by 180° around the origin.

The ui icons for bridges are displayed in the context menu when some track or street segments are above ground. The icons are located in the res/textures/ui/bridges/ folder and are named as their corresponding .lua file. It is recommended that the bridge icons have a resolution of 60×38 pixels.

A tunnel configuration files specifies a set of parameters to define the properties, dimension, features, and visuals of tracks. They are stored in .lua files in the folder res/config/tunnel/.

The file has the following format:

The name property is the text that is used in the tooltip. It can be translated in a strings.lua file. Whether a tunnel is available for rail and/or road is defined in the carriers list. Possible values are “RAIL” and “ROAD”. The cost is influenced by the cost coefficient.

The portals block has three different lists for different cases:

There are two possible combinations for the lists:

Street Tunnels usually use the second one for all three lists.

The ui icons for tunnels are displayed in the context menu when some track or street segments are below terrain surface. The icons are located in the res/textures/ui/tunnels/ folder and are named as their corresponding .lua file. It is recommended that the tunnel icons have a resolution of 60×38 pixels.